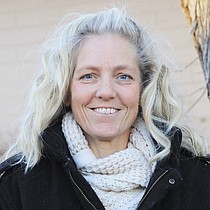 WILLIAMS, Ariz. — Despite Gov. Doug Ducey’s stay at home executive order, the Williams Veterinary Clinic continues to operate as an essential service for Williams area residents and their pets.

FLAGSTAFF, Ariz. — As the only level I trauma care hospital in northern Arizona, Flagstaff Medical Center is on the front line in the fight against the COVID-19 virus.

The center normally provides lunches and activities for area seniors, however, because of COVID-19, the center has closed its doors.

In the city of Williams, residents will see little change since most of the city’s businesses were closed or restricted with Ducey’s March 20 executive order that restricted restaurants and bars.

Covered in snow: Winter storm drops up to eight inches in Williams March 18

Up to eight inches of wet snow fell on Williams March 18.

The Williams City Council passed a resolution declaring a State of Emergency, and councilmembers voted to allow businesses to remain open at their discretion at a special meeting March 19.

GRAND CANYON, Ariz. — As of March 18, Grand Canyon National Park remains open, however, additional closures because of COVID-19 have been announced.