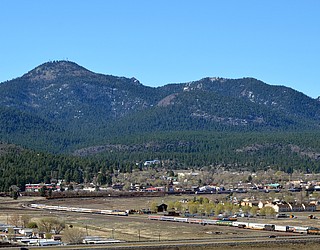 Kaibab National Forest is continuing work on the restoration of Bill Williams Mountain. A contractor was recently selected to begin thinning a 300-acre steep slope on the northern side of the mountain. (USFS/photo)

WILLIAMS, Ariz. — The National Forest Foundation in collaboration with Coconino County and Kaibab National Forest announced Sept. 20 it has selected a contractor for a 300-acre steep slope thinning project on Bill Williams Mountain.

For the Bill Williams Restoration Project, the NFF has worked to bring together funds from multiple contributors that include $1.8 million from the Kaibab National Forest, $800,000 from Coconino County, private funds from the Sperling Foundation and a state grant from the Arizona Department of Water Resources.

“The implementation of this important project would not be possible without partners coming to the table to support the work because we all recognize the multiple benefits of preventing catastrophic fire and flooding,” said Mary Mitsos, National Forest Foundation President.

The purpose of this work is to protect critical watershed drainages that deliver vital water supply to the City of Williams. Removing heavy loads of woody material from inaccessible areas will ultimately reduce the risk of a potentially destructive wildfire that could have devastating effects not only to Williams, but long lasting impacts to other communities to the south that are also dependent on flows from this mountain.

Restoration efforts will include using helicopter logging methods on the steepest slopes of the north face of Bill Williams Mountain. Operations are expected to begin by the end of September.

“The passion and dedication of our employees and partners in finding innovative ways to treat Bill Williams Mountain have really been unparalleled,” said Debra Mollet, District Ranger for the Williams and Tusayan Ranger Districts of the Kaibab National Forest. “Despite tremendous challenges, their focus hasn’t wavered. This steep-slope contract is evidence of the hard work and commitment of so many people to the long-term health and sustainability of the mountain itself and the Williams community.”

Coconino County has identified that fire, and post-wildfire flooding is the number one health and safety threat to the citizens of the County. The County Flood Control District is proud to be invested in this project to help ensure a properly maintained forest for the safety of its citizens and visitors and for the economic prosperity of the area.

“We’re extremely excited that a contractor is in place to start the much-needed restoration work on the steep slopes of Bill Williams Mountain,” said Coconino County District 3 Supervisor Matt Ryan. “We know through studies that a wildfire on the mountain, and the subsequent post-wildfire flooding, would be economically crippling to the city of Williams, the watershed and the entire region. I want to thank the many agency partners including the U.S. Forest Service and the National Forest Foundation for the hard work that went in to securing this first stage of the forest restoration process.”

A Forest Area Closure Order will be forthcoming in the areas around the mountain where steep slope treatments will be occurring. Helicopters accompanied by noise will be noticeable from the city of Williams and surrounding residential communities adjacent to this operation as work begins. There will also be an obvious increase in traffic within city limits as material removed from the slopes will be hauled out by trucks and chip vans.

More detailed information will be made available in the near future as this project moves forward. Additional Information can be found at the following sources: