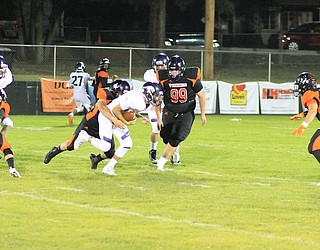 The Vikings take down a runner during an earlier season game with Anthem Prep. (Wendy Howell/WGCN)

WILLIAMS, Ariz. — The Williams Vikings traveled to Nevada to face Pahranagat Valley Aug. 30, in the first evenly matched game of the season for the Vikings.

Although the Vikings lost to the Panthers, the game was thrilling from the kick-off.

The Panthers looked to dominate when they led 12-0 at the end of the first quarter.

However, the Vikings rallied in the second to bring the score 12-8 going into half-time.

The third quarter was scoreless, but the Vikings began the third quarter with a bang when at the 5-yard line, Kolby Payne pitched the ball to Chance Pearson, who threw a pass to David Lozano for a nearly 55-yard touchdown run. The two point conversion by John Bryant was good, and the Vikings took the lead 14-12.

But in the final two minutes of the game, the Panther’s Preston Higbee completed a 20-yard pass to Paul Lewis for a touchdown, and Panther Reece Thornton rushed for the two-point conversion bringing the Panthers the win.

The Vikings traveled to Salome Sept. 6 where they won 50-20.