Time in the barn: Local 4-H programs teach skills beyond the ranch 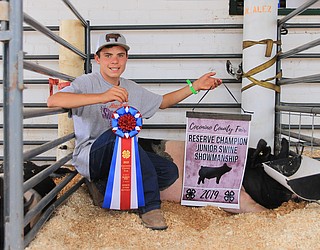 WILLIAMS, Ariz. — Streams of cars lined up at the gates to the Coconino County Fair over Labor Day Weekend. Some came to the fair for the exciting rides, amazing food and challenging games, while others came to see what livestock local children raised this year. 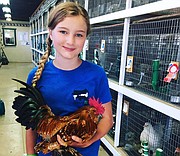 Dozens of kids from Parks, Williams, Valle and Grand Canyon participated in livestock shows at the 2019 Coconino County Fair.

Rural county fairs have traditionally been about agriculture, with early fairs simply consisting of sheep shearing demonstrations and an

opportunity for area farms to showcase their quality livestock.

Livestock raising and showing continues in Coconino County through local 4-H programs, and any casual observer can see the expertise these young members have developed in the handling, feeding, grooming, exercising and showing of their rabbits, poultry, swine, sheep, goats and cattle.

The 4-H clubs in Coconino County not only continue northern Arizona’s home-grown livestock tradition, but are also developing future leaders in the livestock industry and other professions.

“I was raised with 4-H and FFA (Future Farmers of America), it’s how my wife and I see teaching our kids — with structure along with morals and values,” said Richard Gonzalez.

Gonzalez is the father of two boys who are members of the Williams Mountaineers 4-H. His oldest son, Raymond, an eighth grader at Maine Consolidated School in Parks, won Beef Grand Champion Arizona Fed and Bred, and Swine Reserve Champion at the Coconino County Fair. His other son, Ricky, a fifth grader, won a blue ribbon for his swine and also participated in the turkey and poultry divisions.

Gonzalez said the skills his boys have gained through 4-H are skills they can carry with them throughout their lives.

“I believe those life skills will take them a long way, whether they stay in agriculture or not,” he said. “I don’t push agriculture on them, but it’s an opportunity for them and its broadening their horizons.”

“Each day I get up and feed them, clip them, wash them, walk them and make sure they have good water and good shelter,” Ricky said about his animals.

Ricky has learned about caring for livestock from his parents, brother and at regular 4-H meetings.

“A turkey, you want it to run, but don’t let it run too much,” he said. “Ours almost didn’t make weight because it had run too much. It also has to have good shelter, clean water and feed.”

In addition to 4-H, Ricky plays football and baseball throughout the year. He said he tends his animals before school and in the evenings after his other activities.

Julia Dyer, 13, is an eighth grader at Maine Consolidated School, where she participates in volleyball, cheerleading and National Junior Honor Society. She brought a rabbit and steer to the fair this year, and received Grand Champion Novice Showman for her rabbit and placed third in her market steer division.

In addition to animal care, Dyer has expanded her skills in public speaking. Participants at the fair are encouraged to stay close to their animals in the stables and answer questions from fair attendees.

“They expect us to talk to people if they have questions and not be rude to anybody, just be polite,” she said.

“They interact with such a wide, diverse group of folks,” Margaret said. “The 4-H kids run the meetings, they pick officers and they prepare the agendas.”

Julia purchased her steer in November 2018. Over the past year, she has been up every day at 4:30 a.m. to feed and care for her 4-H steer and rabbit in addition to four horses, four goats, a dozen chickens and several show dogs.

“When I get home around five, I feed them, work with them, bathe them, rinse them off and practice showing them,” she said of her 4-H animals.

Julia has learned through 4-H meetings and livestock camps how to keep her animals healthy. The local groups also benefited from the guidance of retired University of Arizona animal science professor, Dean Fish.

“You have to watch for diseases from travelling around,” Julia said. “Ringworm is a big one, after shows we use medicated shampoo on all the steers. You also have to watch their diet and some might not like the water in different places and can get dehydrated.”

Margaret said the experiences Julia has gained through 4-H have taught her about responsibility and consequences.

Katherine Westlake, 17, has grown up south of the Grand Canyon on the Babbitt Ranches. She has participated in the Cataract 4-H club for eight years, and was elected president of the club this year.

“I have had a lot of fun leading our club and I have learned a lot,” she said. “I remember being younger and it being difficult to stand up in front of everyone in our club and give demonstrations.”

Katherine named her pig Anita, after her favorite pasture on the Babbitt Ranch.

“Every year we get to go help our dad brand calves in the Anita pasture,” she said. “We always have a lot of fun and get to add another tool to our ‘character tool box’ as my dad calls it.”

“I love doing 4-H,” Lauren said. “It is a very fun thing to be involved in and I think it is wonderful to get to spend time with animals and learn more about them.”

One of the missions of the Cataract 4-H group is to reach out to the needs of the community. The group visited Alzheimer patients at the Peaks in Flagstaff this year.

“I was able to visit with a lady and she told me a little bit about her life when she was younger,” Katherine said. “It was a very touching experience.”

Katherine said she is grateful for 4-H teaching her about setting goals, using money wisely and being happy for her competitors.

Richard Gonzalez said the support from the community is vital for the continuation of the program.

The Mountaineers hosted an open house this summer where community members were treated to samples of locally grown meat and listened to presentations from 4-H members.

He said he was also grateful for the members and sponsors of the Northern Arizona Junior Livestock Auction Association who support the purchase of the animals.

“I think a lot of the leaders at Parks in the Pines, Cataract and here see that is more than putting feed in a feed pan,” Gonzalez said. “There’s a huge intrinsic value that people don’t see. This is the foundation to where they are going in life.”

Anyone interested in participating in 4-H can got visit https://extension.arizona.edu/4h/coconino for links to the local groups.