Throwback: The past and future of I-17 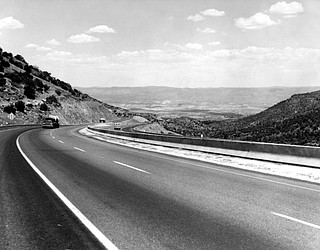 PHOENIX — You can forgive us if we have Interstate 17 on the brain today.

With Governor Doug Ducey announcing a slew of improvements to the highway north of the Valley — widening 15 miles between Anthem and Black Canyon City, adding 8 miles of flex lanes north of Black Canyon City, a total of more than $300 million of improvements — we are thinking a lot about this Key Commerce Corridor between Phoenix and northern Arizona.

As you might know, the road was the original State Route 69 and ran between Phoenix and Prescott. Though started in 1936, the Great Depression and World War II delayed the road's dedication until 1952 — and it would not be fully paved until 1955. Soon afterward plans were put in place for another highway, called State Route 79 and starting at the newly christened Cordes Junction, to head through the Verde Valley and all the way up to Flagstaff. After a series of contracts for companies to build 5- or 10-mile stretches, this highway connection between Valley and Flagstaff was in place by September 1961.

After the start of the interstate system, Arizona decided the sections of State Route 69, State Route 79 and the Valley's Black Canyon Freeway would be designated as "Interstate 17." This transformation would be complete in 1978. You can read more about the history of I-17 in our 2011 Arizona Transportation History(link is external).

All this had us finding photos showing what I-17 used to look like. The undated photos here start in north Phoenix near Union Hills and then go down into Camp Verde.