Lady Vikes get first loss of season to Mogollon 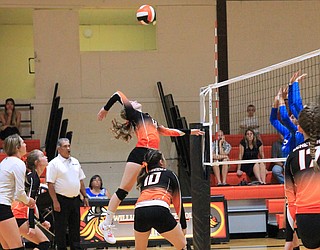 WILLIAMS, Ariz. — Despite taking their first loss of the season, the Lady Vikes played their best volleyball of the season with Mogollon said Head Coach Connie Stevens.

“It was so entertaining, amazing volleyball both ways,” Stevens said.

Stevens said the team was blocking, picking it up after a block, hitting and picking up some hard spikes.

The Vikings played competitive volleyball through the first three games, going 17-25, 25-19 and 19-25 before dropping the fourth game 9-25

“Its something we are going to talk about,” Stevens said. “It was like they were playing not to lose instead of playing to win.”

“You can’t give a free ball to Mogollon,” Stevens said. “They will capitalize on it. They just ate us up in the fourth game.

Stevens said even though the Lady Vikes lost, it was some of the best volleybal she has seen the team play this year.

“They are playing good power volleyball,” Stevens said. “I’m excited for our program next year too.”

“I think we can take them as long as we play our offense and play to win,” she said.