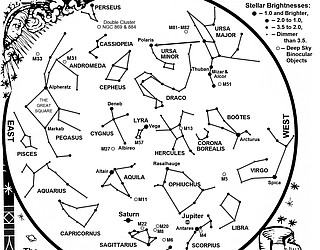 Although there are about 30 annual meteor showers, only a few are often spectacular, such as the November Leonids, the December Geminids or the August Perseid show, which often exhibits many “shooting stars” and has a maximum intensity falling around Aug. 12.

Meteor showers take place when Earth moves through a sand-like debris field left behind over the millennia by an orbiting comet. As it does, these bits of interplanetary space particles slam into Earth’s upper atmosphere where they brightly burn up because of friction with the atmospheric air molecules.

Although the sand-grain sized bits of material travel through space in the same orbits, when they collide with Earth’s atmosphere the streaks appear to originate, or radiate, from a certain direction of the sky (much like looking at train tracks appearing to merge as they become more distant). Meteor showers are named for the constellation in the sky from which the meteors appear to radiate. The radiant of the Perseids traces back to the constellation Perseus.

The best time to observe any shower is between midnight and dawn as Earth rotates into the meteor path. The worst conditions for observing meteors is from light pollution from nearby cities or a bright moon.

The sudden appearance and fast motion of a bright meteor can often produce the illusion of being close, when in reality they may be 75 or 100 miles away. While most appear white, some can be red, orange, yellow green or blue depending on what elements in the meteorite are burning up in the atmosphere. Though rare, there are also some that explode at the end of their flight, because of the contrast of their outsides being extremely hot, and their insides being extremely cold. These are called bolides. The author has seen only four in his lifetime, though one was during the day.

On most any evening, meteors often randomly flash across the sky at unexpected times. In space there are a lot of small pieces of stuff out there, and an estimated 40,000 to 80,000 tons of meteoric material strikes Earth each year. The vast majority of this mass is made up of micrometeorites, tiny dust-sized particles about 50 µm to 1 mm in diameter. It is estimated that approximately one micrometeorite lands per square meter every year, which means you are probably walking over micrometeorites every time you leave the house. The reason we do not notice them is because of their small size and the fact that they are so drastically slowed by the atmosphere that they drift down to the surface and mix with Earth’s soil. Those that were metallic and melted on initial entry appear under a microscope as extremely tiny ball bearing-like spheres. There are those who go out in the desert, or even around their home, who collect them using a strong magnet.

There are meteors that survive the atmosphere and land on Earth each year. Most are football-sized or smaller. The best places to find them are in desert areas or in Antarctica, as they often appear black against the lighter terrain. Pieces of metallic meteorites can often be located using a metal detector.

On Oct. 9, 1992, an extremely bright meteor was witnessed in the sky along the east coast of the U.S. This 26 pound, one foot diameter meteorite struck (and totaled) a parked car in Peekskill, New York. The “Peekskill Meteorite” is still doing the rounds making money for the person who bought it. The teen-age girl who owned the car was able to by a new car and go to college for what she received for the meteorite and car.

But what about the big ones? Living just down the road from Meteor Crater, we think we know what Earth has gone through in the past. However, the 50,000 year old, three-quarters of a mile, Canyon Diablo Crater does not compare with earlier, still existing, meteoroid/asteroid impact sights. Some of the largest are: The two billion year-old, 118 mile diameter, Vredefort Crater in South Africa; the 81 mile diameter, Sudbury Basin, Ontario, Canada, is aged 1.8 billion years; the Acraman Crater in South Australia, dating to 580 million years, is 56 miles across; The Chesapeake Bay Crater in Virginia is estimated to be 35 million years old and is 53 miles in diameter; the submerged Chicxulub Crater in Yucatán, Mexico, which devastated the dinosaurs and 75 percent of all life on Earth 65 million years ago, is estimated to be as large as 186 miles across and there are many others.

Astronomers currently monitor the positions of over 20,000 known near-Earth asteroids and over a hundred short-period near-Earth comets. By knowing when they will cross Earth’s orbit, years in advance, they hope to be able to ‘nudge’ them out of the way before they could strike Earth to avoid any possible future catastrophes

Members of the Coconino Astronomical Society, in conjunction with the city of Williams, will host a Star Party from 7:30-9:30 p.m., at Glassburn Park, in the natural area west of Rod’s Steakhouse parking lot, weather permitting. Several large telescopes will be on hand to view the Moon, Jupiter and its moons, possibly a few early Persied meteors, and other celestial objects.