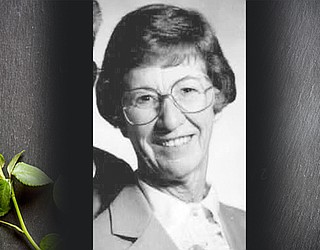 Elsie Tabitha (Hall) Goldsmith joined her soulmate, husband M.T. (Goldie) Goldsmith in the arms of our lord on June 12, 2019. Elsie was born in 1925 in Camp Crook, South Dakota to Anna (Backeus) and Clifford James Hall. The family moved to Williams, Arizona when Elsie was a toddler. She attended school there until her marriage to Ray G. George of Seligman, where they raised two daughters. Elsie moved the Phoenix in the early 1960s and worked for the Motorola Corp. and Howard Johnsons.

Elsie married Goldie in the late 1960s and together they followed construction in Arizona, Nevada and Alaska. During this time she became a certified pilot, flying with Goldie to visit job sites and relatives. They made adobe brick and built a home in Chino Valley where Elsie farmed alfalfa, maintained a huge vegetable garden, canned, crafted and square danced. They also had a home in Golden Valley prior to settling in Kingman for their retirement. She was petite in stature but was not petite with her expectations of herself and others. She led by providing example and accepted no excuses for tasks left unfinished.

Elsie is survived by daughters Patty George and Sunnie Rae Grigsby, seven grandchildren and many great and great-great-grandchildren. She will be laid to rest in Williams.