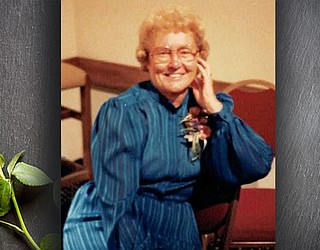 She was a terrific homemaker, mother and wife with a sparkle of laughter in her eyes, a a dry wit and a talent for cooking. Socializing wasn’t her thing but one on one conversations with her were always entertaining.

She kept her eye on politics and sports, worked the crosswords like nobody’s business and read constantly. She and Robert (William’s local dentist) moved to Clarkdale in 1988. He died in 1992 and she moved to Prescott to be closer to Don in 1994. Surviving her are her two sons, Don and Bob (Jeana). No services are planned.